I.      Introduction
This section was designed to give interested folks answers to common questions about mosses as well as clarify what a moss is and what it is not.  For instance, one could read about "Spanish moss" growing profusely over vegetation in Flori 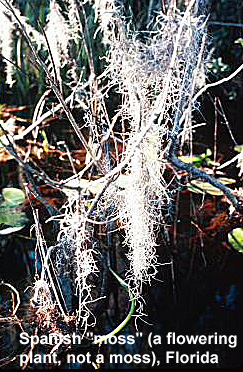 da and the eventual death it brings its plant victims, consequently developing a negative opinion about moss in general.  People and moss have been engaging in this struggle for years and the mosses deserve to have their story told.  Let's see if you change your mind as we more fully explore what a moss truly is.  By the way, "Spanish moss" is a flowering plant related to pineapple which produces small flowers, not a moss at all…

II.     What are Mosses?
When asked to visualize what a plant is, many of us picture a herbaceous plant such as a sunflower, or a woody plant such as a maple tree.  We think of "plants" as possessing roots, a stem (or trunk), flowers, fruit, and seeds.  Most of us do not automatically think of the plants that grow on rocks, rooftops, concrete, and any other moisture-laden area; however, this opportunistic bunch, choosing many eclectic substrates, exists.  Their leaves are mostly one cell thick, they have no true roots, stems, flowers, or fruit, and instead of seeds they have spores.  "They" are the mosses; the plants we see forming "green carpets" with thin wiry upright stems supporting a brown capsule that appears to be wearing a hat.

For more information, read on, and consult Richardson (1981) Schofield (1992), Shaw and Goffinet (2000), and Sterling (1955). For in-depth information on the ecology of mosses, see Janice Glime's online book, Bryophyte Ecology.

III.  How do mosses reproduce and spread?
Mosses spread in multiple ways, but unlike flowering plants, they depend on moisture to sexually reproduce.  Mosses reproduce by spores, which are analogous to the flowering plant's seed; however, moss spores are single celled and more primitive than the seed.  Spores are housed in the brown capsule that sits on the seta.  As the spores ripen they are dispersed from the capsule, and some land in areas where there is enough moisture for them to grow.  The young moss looks like a very thin

tangled mass of branching green hairs.  Buds will appear next on the green hairs, from which tiny stalks and slim leaves will grow.  Some mosses have cups on their tops that produce sperm, these are male plants.  The female counterpart has eggs between her overlapping leaves.  Water is a necessity for fertilization; as the sperm become mature they have to swim to the eggs to fertilize them.   The fertilized egg then produces the stalked brown capsule.

Mosses also spread asexually by sending out new shoots in the spring from last years plants as well as fragmentation.  Pieces of the moss body can break off, move by wind or water, and start a new plant if moisture permits.

V. How do Mosses Acquire Nutrients?
Mosses also have different mechanisms they use for acquiring nutrients.  Some mosses are able to take up nutrients from water flowing over them, thus they have very effective absorptive surfaces.  Other mosses, such as Polytrichum, sequester nutrients directly from the soil or substrate on which they are growing and transfer the nutrients to their growing tips.  With this in mind we can see that the physical and chemical nature of the substrate as well as its water holding capacity are extremely important in establishment of mosses.

V. Where do mosses live?
Now that we have seen the resilience mosses possess via their multiple modes of reproduction, it is easier to fathom that mosses can live anywhere from the Arctic Circle to the tropical forests at the equator.  Mosses can be found around hot springs, at the bottom of lakes, on rocks, sand dunes, trees and, even in a few cases, sea water.  And of course those of us who live in the Pacific Northwest know that mosses thrive in moist temperate forests.

An opportunist, mosses grow on our trees, sidewalks, garden, rooftops, and everywhere in between.  The two main requirements of a moss are sufficient moisture and accessible nutrients.  For example, the moist environment of a rooftop shaded by trees seems just fine for mosses.  Not only does the rooftop stay perpetually moist, but nutrients are also supplemented from the ash that fireplace chimneys produce (Schofield, 1973). See section regarding Mosses on Rooftops. Shingles composed of wood, asbestos, and conglomerate composition all make suitable homes for moss; however, metallic roofs or those with an abundance of tar will discourage moss growth.  But the tarred roof must be smooth to assure that mosses will not colonize in the cracks and crevices. Mosses prefer to colonize shingles above the eaves, on detritus that builds up in the eaves' troughs or other depressions.  Mosses will be at their best in the winter when there is plenty of water, little light, and low temperatures.  In summer mosses dry out and become dormant.

VI.     What are mosses good for?
Unknown to most of us, mosses actually have many uses, from ecological to medical with a suite of common household uses in between.  One of the better known ecological uses of moss is as bioindicators of air pollution, such as those caused by factory emissions. They are very good indicators of acid rain damage to an ecosystem as well.  Mosses are also used as erosion control agents as they aid in moisture control and stabilization of soil that would either be wind blown or washed away by water.  Mosses occupy an important ecological niche in arctic and subarctic ecosystems where moss symbionts provide most nitrogen fixation in these ecosystems, as compared to the leguminous associations that are responsible for this job in temperate regions.  Mosses can also be used as bioindicators of water pollution and treatment of wastewater.

Throughout history mosses have been used in horticulture because they are beneficial to the soil.  Mosses increase the amount of water soil can store and improve soil's nutrient holding capacity.

In the United States mosses are not highly acclaimed for their use in gardening. But ornamental and garden uses of mosses are becoming more common. See the book Moss Gardening by George Schenk.

Mosses are aesthetically beautiful and provide an attractive covering over soil and concrete surfaces that would otherwise be bare.  We should feel lucky here in the Pacific Northwest that this unique and ornate organism grows easily and can provide much diversity among our gardens, rooftops, and sidewalks.  See section on Encouraging Mosses.

VII. What are liverworts? 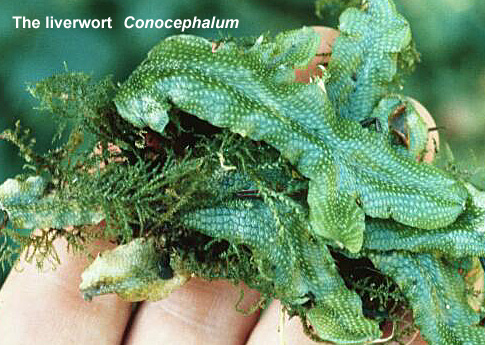 VIII. What are lichens?

Although lichens often grow with mosses, and people commonly 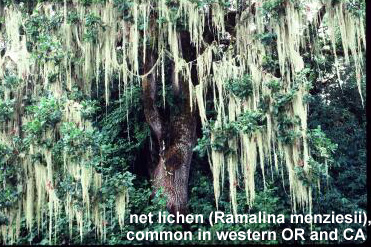 confuse them, they are quite different. Lichens are a mutualistic association between a fungus and an alga or cyanobacteria. This site contains a few references to lichens, but we recommend that you visit LichenLand to learn more about them. See our examples of living with lichens.