The most common moss found in lawns and gardens in Corvallis, Oregon was Eurhynchium praelongum.  It is a regularly to irregularly branching, sprawling moss of light to dark green color. Eurhynchium oreganum, a similar species, is very common in the outskirts of town and the mountains. Table 1 (shown below) details the abundance of selected mosses.  Eight of these specimens were found in lawns.  Two were found in gardens.  This moss is predominately a lawn inhabiting moss in Corvallis. 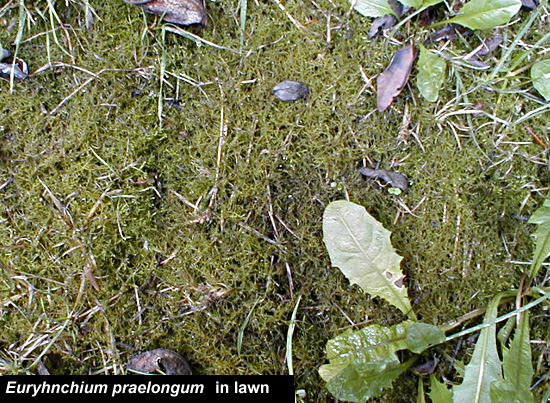 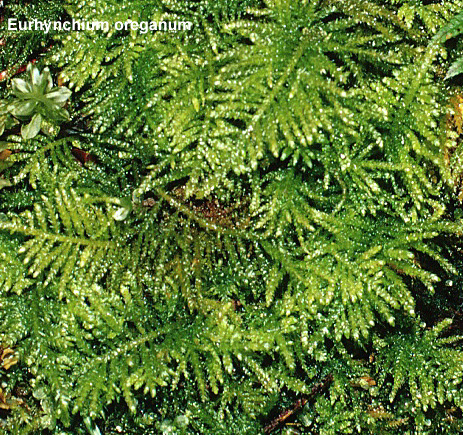 The next most common species found was Scleropodium touretii, which has cylindrical (julaceous), spreading branches that form low mats.  This species, S. touretii, is usually found on soil which are dry during part of the year (Lawton 1971).  Four of the nineteen specimens examined were found to be S. touretii, a moss found equally in both lawns and gardens.

Two specimens consisting of both Barbula vinealis var. flaccida, and Funaria hygrometrica were found.  The Barbula sp. is a tuft forming, not sprawling, moss and was to be the more dominant moss in these particular specimens.  Close examination revealed the upright, short (about 1 cm) stems of twisted leaves of the Funaria hygrometrica, a moss that consists mainly of capsules and few stem leaves.  These two moss species were found in a garden and are thought to be a garden species.

Other mosses found were Homalothecium nuttallii, Pseudoscleropodium purum, and Brachythecium asperrimum, all of which consist of cylindrical, short, mat forming branches like those of Scleropodium. In contrast,

Pseudoscleropodium purum is similar to Scleropodium sp., though it is larger with less cylindrical branches and has a more regular branching pattern.  This moss is commonly found in lawns and gardens.  Brachythecium asperrimum is a sprawling moss with large leaves (3 mm).  The leaves are spreading from the stem.  This species was found in both lawns and gardens.

Funaria hygrometrica is a common species of burned ground. As an initial colonizer it is helpful in reducing wind and water erosion. 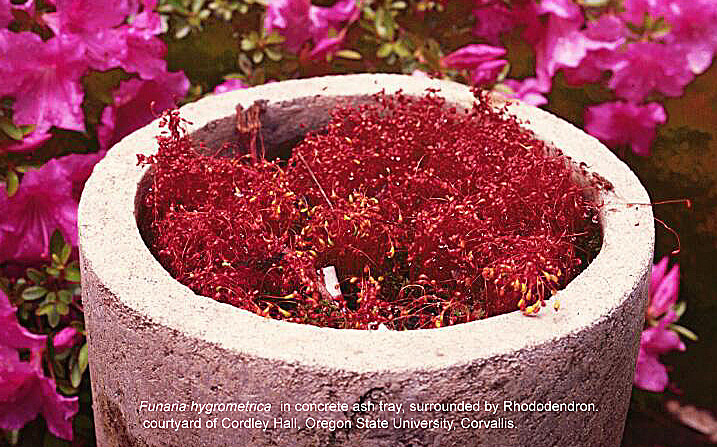